The
barelyknown
manifesto of Sean Devine

Apple Watch Series 5 went on sale last week. While I wear the Series 3 daily, I wanted to upgrade for the "Always-On" display so that I could see the exact time at all times without triggering the screen to wake up. How incredibly human-scale of me.

On my walk from our newly-old office to Apple Michigan Avenue to try it on, I changed my mind. The last thing that I needed was more attention on my relatively insignificant minute-by-minute trials and tribulations.

Instead, I invested the $200 it would have cost to upgrade into a permanent reminder of what's really at stake. 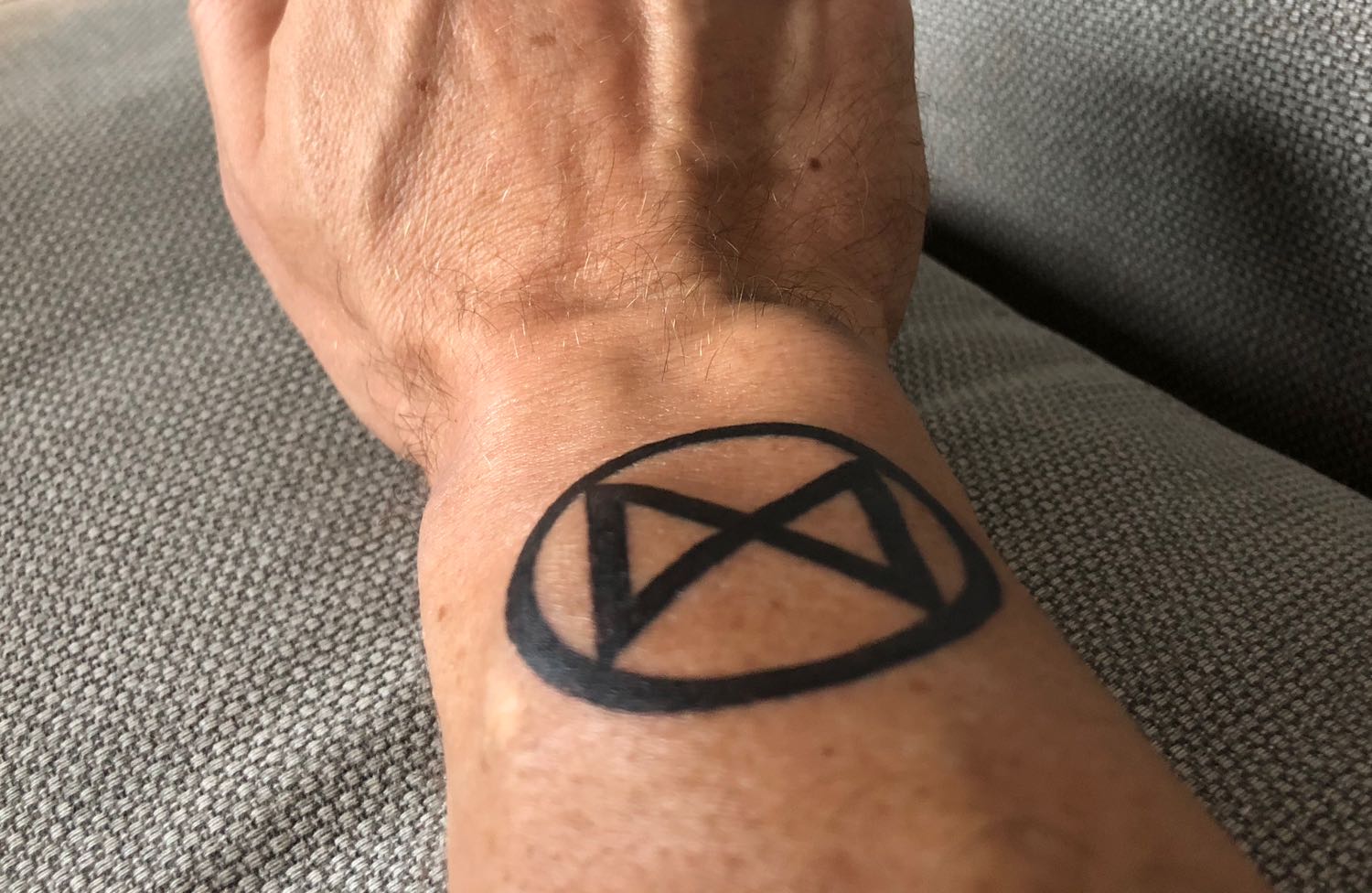 I tattooed the extinction symbol on my right wrist in the size and position of a watch face as a reminder of the critical moment we're in right now. I know more than I need to know about climate change and its implications, but I'm not doing enough.

I was introduced to this symbol by a kottke.org post earlier this spring. As Jason and the official website explained:

No extinction symbol merchandise exists, and it never will do.

I understand why that decision was made, for better or worse.

This was only my second tattoo.

My first was my wedding "ring" 8+ years ago. I passed out with very little notice right in the middle, just as the outline reached the inner-most edge of my finger. I woke up confused with a lollipop in my mouth and a mini orange juice box in my hand. The folded & furrowed brow of the tattoo artist did not spell sympathy.

If you've never seen my face blanch at the mention of blood, it would be easy to underestimate reflex syncope. Words, thoughts, and pictures trigger me as easily as pain. Its been that way since I was a kid and isn't letting up.

About ⅓rd of the way through the extinction symbol tattoo, I was feeling cocky. I felt fine! So fine that I chose to mention to my tattoo artist (Sho from 9 Mag) that the last time I was tattooed I passed out even though I felt totally ok this time. Those words left my mouth and swirled around my head in a dizzying blur until 1 minute later I mumbled that I might have spoken a… bit… too… soon…

Ironically, I lost all understanding of time between then and when I was handed a cup of Pedialite and a cold paper towel for my forehead. Two for two. Ten minutes later, and my bearings were back.

Sho returned, pulled closed the curtain in front of his booth, and asked if I wanted to continue. I said "yes, definitely" — I actually felt pretty good. Then he said, looking down, "It's just that you had a bit of an accident." I followed his eyes until I understood why I felt so sweaty.

This time, I pissed my pants too.

Made with Ember
Open source